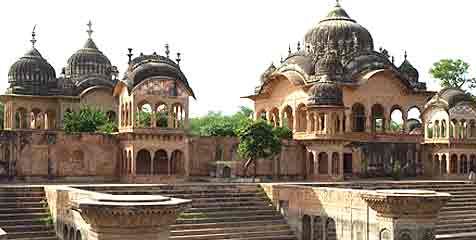 A slew of projects, including widening of roads, were on Wednesday promised for the twin towns of Mathura and Vrindavan – also known as Braj or Sri Krishna land – to convert the area into a developmental hub.

Uttar Pradesh Chief Secretary Alok Ranjan, at the end of his two-day visit to Mathura, also directed the Mathura Vrindavan Development Authority to deal firmly with the land mafia that had encroached on the the Yamuna flood plains.
The chief secretary assured of speedy action on improving the road network in the district and also announced that the holy town of Goverdhan would be a new tehsil of Mathura district.
For the coming Mudiya Poonau (full moon), the annual fair that attracts more than 10 million pilgrims, a sum of more than Rs.2 crore has been released to upgrade civic amenities, he said.
The state government is keen on transforming the Mathura-Vrindavan hub with a dozen infrastructural projects that include four-laning of major approach roads from the Yamuna Expressway, a new bypass, among others.
“The increased road connectivity will help speed up growth and development,” officials said after a review meeting.
“Mathura and Vrindavan will emerge from the back waters to showcase the work of the Akhilesh Yadav government in the state. Some of the projects are already in pipeline while a few need to be given finishing touches before launch,” Mohan Yadav, a Samajwadi Party worker, said.
In March the chief minister had announced major programmes to upgrade the Vrindavan Shodh Sansthan, arrangements for pilgrims staying overnight in Goverdhan, Barsana and Gokul, formation of special squads of tourist police, uninterrupted power supply to Goverdhan parikrama marg, a barrage in Vrindavan on Yamuna and a link canal to divert water to the Agra Canal.
The government after the success of Sonkh Water ATM has announced five more such facilities. A plan to beautify the parikrama marg with ornamental plants and shady trees plus pucca footpaths is in the pipeline.
IANS